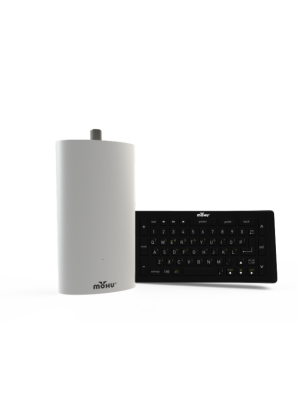 Mohu, the industry leader in indoor HD antenna which allow you to watch a large portion of live shows and sports on your HDTV have released a new device that combines streaming apps and Over The Air Television into one device. Additionally the device has a remote control that is actually a RF keyboard that makes it much easier to enter information and navigate menus than an onscreen keyboard with a traditional remote control.

Ready to cut the cable bill? Here’s how to do it.

Originally funded through a Kickstarter campaign Mohu  Channels quickly surpassed its funding goal and made it to market a short time after that. The device supports 5.1 Dolby Digital Pass-Through to go along with HDMI video so sound and picture quality will be what you have come to expect from similar devices.

Combining streaming media services with over the air HD television into one convenient device could be a real game changer for the cord cutting industry. By putting everything in on place Mohu Channels might entice the device simulates the traditional TV viewing experience and could entice people who have previously been scared off from cord cutting by an unfamiliar technology.

Watch this video for a demonstration of Mohu Channels